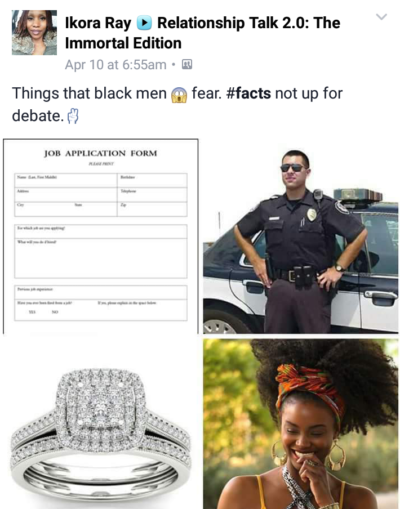 Do black men really fear the above or is it simply black women exercising their delusions of grandeur once again? I happen to believe the latter is true. Let’s deal with these shall we. For starters it must be pointed out that the demographic of black men who don’t like work are the same individuals most black women are attracted to, therefore I fail to understand what the complaint is all about.

It is now a well established fact that black women love the unproductive, low brow males of black society, in case anybody has any doubts with regards to this, allow me to introduce exhibit A into the equation:

Now I personally do not have any problems with black women and their love for thugs, criminals and gangster types just as long as those same black women are willing to drink down the consequences of interacting, dating and procreating with such men. The problem I have is when black women attempt to escape the fruits of their reckless decision-making by thereafter homing in on the men who they rejected at the beginning, the good, decent, hard-working black men.

No, you made you contaminated bed and now you must lay in it. Of course there will always be a simp who will be ready and willing to step up and “save her” from the coming judgement. That is on him and he will suffer and perish in like manner. As I have stated many times before women who make bad decisions must be left to stew and marinate in their own failures, they must be held to account for their action BY THEMSELVES.

With regards to the police black men have a legitimate right to be concerned about them, even the most law-abiding black male can be subject to the rough hand of the law. Remember the unarmed black man out of Florida who was looking after his autistic patient who was surrounded by police. He was instructed to lie down on the floor, he complied with all of their instructions and yet he was still shot:

Or what about Floyd Dent, a black man who was pulled over by police, pulled out his car, thrown to the ground and beaten to a bloody pulp:

At the end of the day black sirens like Ikora Ray will run their mouths all day concerning black men and encounters with the police because already being assets of the state black woman are not subject to the same penalties as black men. It is also well-known that black women many a time will use the enforcement arm of the system against black men whenever they feel like it.

How many black men are sitting in jail right now because a black woman initiated some kind of legal process against them, most of them I would say. Talking about black men fearing the police is no laughing matter. It’s a pity that black women are not being accosted, beaten up, bludgeoned in the head and shot by the police as much as black men, if this were the case I’m sure they would be singing a completely different tune.

With regards to marriage, black men on the whole are not afraid of commitment, it’s simply a case once again of black women preferring to deal with men who are not looking for anything long-term. Besides, most black women today are sub par below standard trash, they are not marriage material thus they are NOT fit nor worthy of marriage to begin with.

Twerking and fighting in public, wearing the hair of white and other non black women upon their heads, assassinating unborn black children to the tune of almost 1900 per day in abortion centers. Let us also not forget that these are the same black females claiming that they are independent and that they have no need of men. Well, which one is it, are you independent or do you want to be married?

Lusting after and worshipping white men as gods to the point where black women are churning out 1000s upon 1000s of novels on Amazon channelling their pipe dreams of either being married to a white man, being his side piece or worse still his sex slave. Don’t take my word for it, go onto the Amazon website, put in “black women white men romance” or “black women white men novels” into the search bar and see for yourselves.

Exactly how are women who engage in all of the above worthy of marriage? The fact of the matter is in 2017 most black women are defective beyond repair, marrying them would be a serious detriment to any black man’s life, not a benefit.

Lastly, with regards to the final picture I assume it is in either in relation to the woman’s dark skin complexion or regarding black women period. In relation to black women the reason why more black men are beginning to choose non black women over them is simply because non black females by and large more are functional and feminine.

Black women as a collective enjoy taking pride in being rebellious, combative, difficult and violent, they seem to believe that these are normal and totally acceptable behaviours to introduce into a relationship and it by and large is the darker skinned black females who typically bring in the most problems. However, critical thinking black men know otherwise and are simply choosing to vote with their feet.

Black men, pay no mind to ignorant and dysfunctional black females agitating and stirring up the pot seeking attention. Continue to do you while these black harridans to continue to complain to themselves and suffer by the wayside. Be sure to check out my book Negro Wars where I deal with the delusional mindset of the modern-day black female in greater depth. 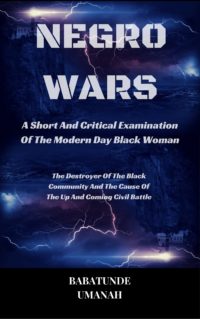 It appears that people across the United States are pretty much not down with the quarantine rules and regulations while looking to burst up their morale with a well-deserved hood party. It happened before numerous […]

ME THINKS NIGGAS DOTH PROTEST TOO MUCH

In the recent controversy on Black You Tube, it was discovered that Black Male You Tuber Phil from the Advise show has a non-black wife. Niggas have come out of the woodwork to cast aspersions […]

It’s time that we must admit that Black women are the Sacred Cow of the Black Community. Like Jesus, we hold these bitches in high regard and value in comparison to Black  Men. Our Fathers […]