Six years ago, yet another round in the never-ending “conversation” on “Black relationships” was sparked with the release of “Is Marriage For White People: How The African-American Marriage Decline Affects Everyone” – a book written by Stanford Law professor Ralph Richard Banks. His argument? That it was time for highly educated and successful Black women, to abandon the “brothas” and seek love wherever they could find it – meaning, with non-Black men. Banks further contended that this would somehow restore the balance of power between Black men and women on the open mating market. 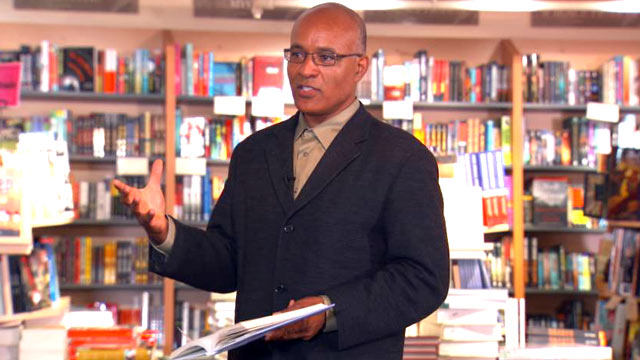 The book quickly gained national attention, despite obvious flaws – chief among them, the utter lack of representation of Black men, and especially blue collar, everyday Black men, in the book. Banks openly admits this omission, on the grounds that during the paltry number of interviews he attempted to conduct with Black men, they weren’t as forthcoming as those he conducted with Black women, who had much more to say on the matter.

The book is filled with “cautionary tales” of what happens when highly successful Black women “give brothas a chance”, especially blue collar ones; acrimony, clashes over values like education and money, divorce and even violence to the point of murder ensue. The clear message here is that such Black women simply cannot afford to deal with Black men “not on their level”. It was “red meat” for the so-called “Black Women’s Empowerment” crowd – a silly euphemism for Black women who have determined that “Black Men Ain’t Shit” and have decided that the proverbial White Man’s ice is colder”. Banks was held out as one of the relatively few caring and understanding Black men that the swirling crowd could get behind.

And get behind them, they did.

To be sure, there were detractors of Banks’ work – much of it in the form of, to be frank, ad hominem attacks. There was no pointed, specific, refutations of Banks’ book or its claims – which was as troubling to me as the book’s clear weaknesses itself. Personally, the very fact of the conspicuous absence of voices like mine made me immediately suspicious; as I read the book from cover to cover in the summer of 2011, the supicisions mounted. I could feel that something was “off” – but I had no smoking gun proof, just hunches. Had I gone on the record then, as a blogger and writer fairly well-known when it came to men’s issues, I would have come off no better than other critics – which is to say, ineffectual.

It took six years for the smoking gun to present itself. I’m glad that I was patient.

A little while back it came to my attention that the “star” of Banks’ book – a Harvard-trained corporate lawyer known as “Cecilia” – had given a completely different account for how and why she was so “unlucky in love” – and it had nothing to do with blue collar brothas, and a lot more to do with the nearest mirror. 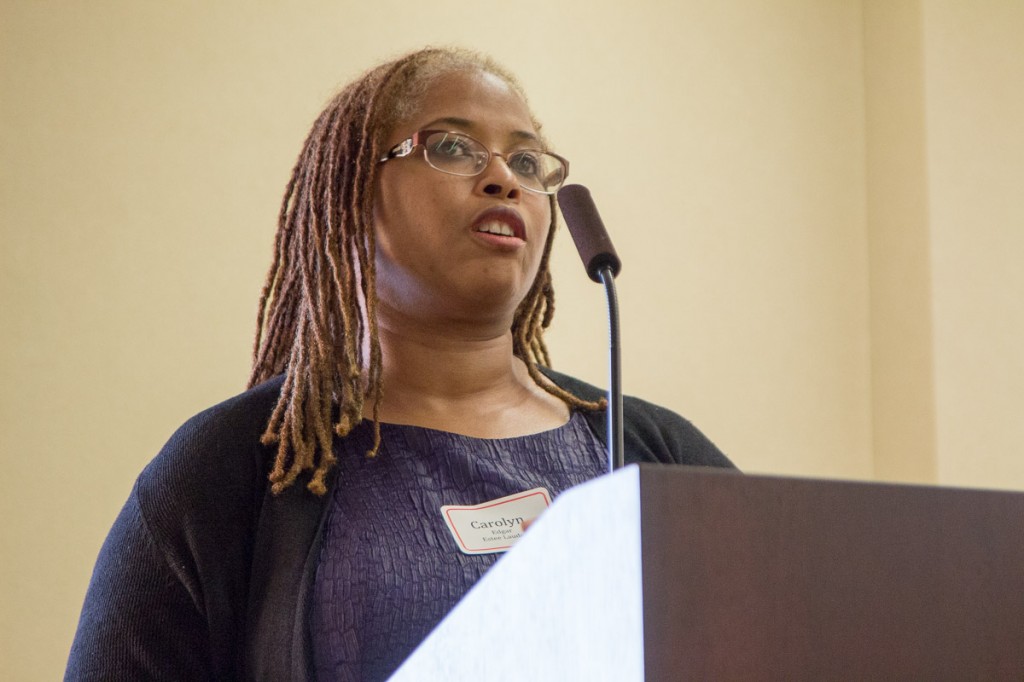 Carolyn Edgar, who when she’s not being counsel for Estee Lauder by day is an aspiring writer by night, a divorced mom of two kids and a social media butterfly, wrote the following description of herself in an article called “The Grooming”:

“When I was fourteen, I was what guys now call “thick.” In 1979 terms, though, I was just “fat.” I developed early and had boobs and butt galore, but I also had linebacker arms and thighs to go along with them.

In my family, my sisters were the beauties. My oldest sister Cheryl was fair-skinned with deep green eyes. My second oldest sister Caroletta had naturally wavy hair that required no heat straightening to cascade over her shoulders and down her back. I had neither. My eyes were hazel, more brown than green, and my hair, according to my mother, was “nappy” and had to be pressed. Both my sisters were slimmer than me: my oldest sister was short and curvy, and my second oldest sister was thin and muscular, with a tiny waist and large breasts. With my brown hair, brown skin, brown eyes and thick thighs, I most closely resembled a piece of well-done fried chicken.

Since I wasn’t considered a beauty in my family, I tried to content myself with being the smart girl, the good girl, the girl who never got into trouble, and I told on my siblings who did. When I reached my teens, I didn’t just want to be smart anymore—I wanted to be cute, too. But my weight kept getting in the way.

At Precious Blood, the small Catholic school I attended for eighth grade, the fine boys in my class either ignored me or teased me. It was always good sport to make fun of the fat girl. The only other male attention that I regularly received was the street harassment that I endured nearly every day as I walked home after school. Men would drive slowly alongside me, shouting, “Hey baby, can I talk to you?” I would ignore them and continue walking, acting if I didn’t hear the comments they made about my ass and what they’d like to do with it. Eventually, they would scream, “Fuck you then, you fat bitch!” when I kept my eyes focused ahead and refused to acknowledge them.

All throughout eighth grade, I had watched couples sneak across the parking lot at recess and go behind the nursing home adjacent to Precious Blood to make out. High school, I hoped, would mean a wider variety of boys, some of whom might appreciate my ass like the men who followed me in cars, but hopefully without the “fuck you, fat bitch” part. Unlike all the schools I’d gone to before, my high school—Cass Technical High School, Detroit’s largest and most prestigious high school—was huge. With over five thousand students, the school was filled with good-looking boys everywhere I turned. My second oldest sister, a senior, was friends with all the hot senior guys, but to them, I was just her little freshman sis.

Along with the multitude of hot guys, there were girls at my school who were bona fide glamour queens. Every day, these daughters of doctors, lawyers, and judges came to school with their slim bodies dressed in the latest fashions. I envied their tight Calvin Klein jeans, their fresh-from-the-salon hairstyles, their Fashion Fair and Clinique makeup, and their Coach purses. With so many beautiful girls around, no matter how many boys I had crushes on—and the crushes felt like legion at that point—the guys I wanted to notice me were paying no attention to the shy nerdy fat girl.”

Edgar’s missive – clearly intended to garner sympathy for a near-miss incident she had with a Black man twice her age at the time and who would go on to prison for murder, belies all of the bleedingly obvious sense of entitlement and denial. But most egregious is Edgar’s refusal to consider that it was her appearance that may be at the heart of her woes in love – as “The Professor” Tom Leykis bluntly observes, mating is “Darwinianism at its finest”. Edgar attended Harvard Law School with the likes of the aforementioned Banks, heart throb actor and New York Times bestseller Hill Harper and future POTUS Barack Obama – two out of three of which have gone on to marry well. This would make sense; Black men are now graduating from college at all-time high rates: 4-to-1 when compared to Black men in and out of prison, in fact.

However, such facts come as cold comfort when you’re as unattractive as Edgar – again, this is in her own words, not mine. See above. Simply put, highly desirable Black men don’t mate with Black women like Edgar, regardless as to their own educational level. Maybe Edgar got with her ex-husband “Daryl” (as he’s described in Banks’ book) because she couldn’t do any better. Black men of more modest means must take whatever they can get and millions of them do.

That knowledge completely changes things, doesn’t it? From the idea of a “shortage of eligible Black men” to the reality that there are literally millions of Black women out there like Edgar – highly educated and successful but seriously unattractive to Black men most in a position to pick and choose whom they really want in a mate – and various attempts – like the “dark girls” movement, or the “body acceptance/fat shaming” movement – haven’t moved the needle in this regard. Right now, you’re hard pressed to think up a prominent or otherwise successful Black man who has a Carolyn Edgar on his arm, aren’t you? Feel free to be repulsed by my words; but also know that you’re repulsed in part because they’re true.

It’s become fashionable for women in general and Black women in particular to scapegoat their problems in life onto Black men who least have a voice in the mainstream media and its counterparts in blackface – take the “street harassment” debacle, for example. Something else that Edgar is known to holler about. Have you ever noticed that the loudest voices in the room in that regard tend to come closer to Edgar in appearance than say, Kim Kardashian or Amber Rose? That’s not by accident, folks. Again, to quote Leykis, the harsh truth of life is that “water seeks its own level”. These women are livid that their educations, incomes and the like doesn’t insulate them from the men who are truly on their level – nor does it catapult them into a higher bracket of men in the mating market. Of course, the obvious answer to their quandary is to invest their considerable disposable incomes into making themselves as conventionally attractive as humanly possible so as to make themselves more competitive on the open mating market – but even admitting such a thing challenges their delusions, removes the blame for their lives off others and places it squarely on themselves.

Edgar didn’t “settle for less” in a mate when she married “Daryl”; she got the man she deserved, with what she could negotiate for out on the open mating market.

In next week’s column, I will discuss the role Black men like Banks play in enabling the fuckery of Black women like Edgar.

Mumia Obsidian Ali is the Sunday columnist for the Negro Manosphere. He also hosts a daily podcast “talk radio show” called “Obsidian Radio” on YouTube. Follow him on Twitter @ObsidianFiles.

A Gentleman Knows When To Keep His Word – & When Not To (Or, “All THe Crazy Ladies” Revisited)

“A wise prince should never keep his word when it would go against his interest, because he can expect others to do the same.” Niccolo Machiavelli, “The Prince”, Cliff Notes Summary Last year, I wrote […]

NO, Black Women Do Not Change Their Mating Criteria In A Time Of Crisis

“What women actually want in a mate has puzzled male scientists and other men for centuries, for good reason. It is not androcentric to propose that women’s preferences in a partner are more complex and […]

Sophia A. Nelson’s Pew In The Mega-Church Of Horrors

“God don’t like ugly.” -The Bible In my previous column for the Negro Manosphere published on Apr 2, 2017 entitled “The Sistahood Has No Clothes”, I discussed the woefully misguided efforts of attorney, author, freelance […]