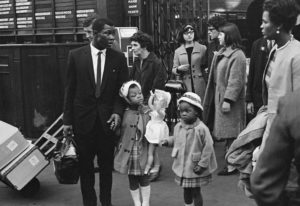 The demonization of black men by the British constituted a key plank in the rationale for slavery and colonialism. This practice served to mask the insecurities of the dominant white male group. As the famous radical French Caribbean psychiatrist Frantz Fanon concluded, in his classic text ‘Black Skin White Mask’ (1967), the white man’s obsession with the black man’s penis was about his own anxieties when confronted with men who they viewed as their superiors in ideal masculine terms.

The penis in this instance being a symbolic representation of the masculine entirety-the masculine essence. Black men generally had or have little interest or jealousies about white men’s penis or anything about them. Unlike black women, Fanon noted, black men have never wanted to be white. The fear and insecurities which black men create among white men is unique and structures their social relations to this day and symbolised by the fact that castration was a punishment reserved for black men. This anxiety was also seen in white male fears about the relationship between black men and white women. The fear of black men is real. Very real and operates at numerous levels.

Despite former colonial citizens being invited by the British government to assist in the post-war economic reconstruction of Britain, the initial experience of immigrants from these countries was less than welcoming. The experience of coming to England was an eye-opener for black people to see how white people behaved in their home countries, compared to how they conducted themselves in the Caribbean, for example, and how relatively backward the average English person was. Contrary to the construction of British superiority which underpinned white rule in the Caribbean, immigrants were able to see the Emperor had no clothes in his own back yard, no matter how whites tried to behave abroad.

Verbal and physical assaults were not uncommon in England. Caribbean male immigrants’ willingness to meet white violence with superior physical force served to forge the perception of them in post-war Britain as being extremely dangerous, with little compunction to respond in kind to threats to themselves or in protecting other black people. Sheila Patterson’s ‘Dark Strangers’ (1963) details the response of Caribbean men to white male provocation at work, on the streets, and elsewhere. Unlike their Caribbean male counterparts, African immigrants (disproportionately Nigerians) tended to avoid confrontation or participation in the fight against racism and quietly accepted the treatment they were often subjected to. This was to change with later generations of British-born Africans identifying with their Caribbean peers and adopting their norms.

These conflicts were a crucial stage in the community building process, that of making streets safe for the new immigrant community and established clear boundaries for white predatory groups, which enabled black people to go about their business in safety. Post-war Immigration to the UK was dominated by men who after laying the foundations for family life sent for their women. Black males built the infrastructure of the British black community. Today Indians like to boast about their leadership and dominance of economics and commerce. However, the most outstanding business leaders in the post-war migration era were Caribbean men. The politically conservative Jamaican Dudley Dryden was the first immigrant to become a multi-millionaire and honoured by the Queen who made him an MBE (Member of the British Empire) for his leadership and contribution to the business sector. Dryden was the leader of the Caribbean business community and the London Chamber of Commerce and an unapologetic Pan Africanist and Black Nationalist. Dryden was the head of a network of black businessmen from major cities across the country.

THE POLITICAL AND ORGANISATIONAL INFRASTRUCTURE OF BLACK BRITAIN

The entire infrastructure of black life was created and led by black men with some notable exceptions, such as Claudia Jones from Trinidad and Tobago and a small group of similar women up and down the country. This included establishing organisations, social clubs, dance and music venues, various types of businesses and personal services such as food outlets and barber shops, and churches. The increasing and politicised hostility against immigrants witnessed the emergence of violent racist organisations. Caribbean men responded by creating self-defence organisations in major cities. The police and secret intelligence service (with the assistance of the FBI) targeted many of the most high-profile leaders which resulted in the ‘Black Power Trials’ of the late sixties in an effort to squash black male determination to protect their communities.

These events are documented in Bunyan’s ‘The Political Police in Britain’ (1977). Black men responded by reorganising self-defence organisation and adopting more covert ways of working. One of the key figures in this process later became my Director and head of Security and Intelligence, a Jamaican from Maroon antecedence, and former military man. This individual was one of the most talented and fearless men I have ever met. A  small and quietly-spoken former judo instructor, with an obsession for detail,  this leader was to create the framework and rigorous approach to the security field which would frustrate the police, the extreme right, and other enemies for over a decade. He was also instrumental in giving me the career I was to enjoy and still do to this day.

The resistance of the black community attracted the attention of Dr Martin Luther King, Malcolm X, and Stokely Carmichael who visited England in solidarity with their brothers. These actions underpin a strong political and familial association and identification that British Caribbeans and later Africans have with black America which continues today. Britain remains a popular destination for black Americans in the areas of politics, scholarship and academia, music, the performing industries and a place to visit. These shared sentiments were crucial in the formation of the Pan African Congress Movement, the largest and most influential radical political organisation in British history. The PACM evolved from regional networks of cooperation between black nationalist, pan-African, radical socialist intellectuals, activists and black right organisations, in the late sixties to a full-fledged national federal governing structure. 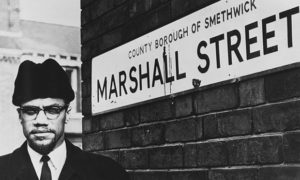 The racism experienced by second generation Caribbean males during the 1970s, starting in the education system was replicated elsewhere with youth unemployment rates of 60 percent in most parts of the country. Unlike their fathers who enjoyed full-employment and able to fulfil traditional Caribbean notions of masculinity, i.e. get married and support families, their male offspring were to meet a less supportive environment. This was a period of serious clashes between black youth and police in the context of a white media constructed moral panic about young Caribbean males and crime that saw the first of a series of major riots which stunned the government.

Despite their small numbers young Caribbean men and youth shook the country, unlike Jewish, Irish and other immigrants who simply accepted abuse and violence as part of the price of acceptance in order to fit in. Young British-Caribbean males, like their immigrant fathers, had different ideas. The sight of police fleeing en mass from entire areas in the face of intense violence, as in Notting Hill in 1976 and Brixton in 1981, had never been seen in mainland Britain before. The Sun newspaper described the damage inflicted during the rebellions, starting in Brixton before spreading throughout the country, as the worst since the Second World War. The Home Office Select Committee on Race Relations viewed these events as evidence of the ‘civil war’ it had predicted if their call for serious change in policing were not introduced, given Caribbean youth were unlikely to passively accept overt racist policing. As I have described elsewhere, Caribbean males were flocking to join martial arts, boxing clubs, and gyms in their thousands up and down the country in preparation for war. 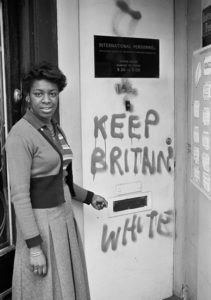 The Scarman Report which followed the ‘riots’ of 1981 led to the introduction of equal opportunities in employment matters, in efforts to address the discrimination black people experienced. Its priority was the public sector which was funded by the taxpayer and one of the largest employers in Britain. Prior to this, even jobs considered low status such as street cleaners (which in fact was well-paid and required relatively few hours) black male were barred from and was controlled by powerful white unions. While a small number of jobs were opened up to black males, the primary beneficiaries of this new policy were black women in areas such as administration, the social services, leisure services, education and the health services, given the cynical informal policy adopted from the US of employing them as ‘two fors’ i.e. meeting two criteria of discrimination. Due to the rise of feminism and gender equality advocates, who seized the opportunity to press for equal opportunities for women, and minority women, and were successful in securing jobs for their constituents.

Ironically, black men and youth, who put their lives and liberty on the line in clashes with the police, and forced the government to act in the form of the Scarman Inquiry, were largely excluded from the new job and training opportunities; despite this group being identified as a priority in the Scarman Report given the widespread inequalities they experienced. Similar to the American Moynihan Report, Scarman prioritised the needs of black males and its importance in the health and effectiveness of their communities and society, only for these recommendations to be ignored and the opportunities created by the report to be monopolised by others.

In many of the most politically left-leaning local authorities black males who had obtained managerial jobs often lost them due to feminist-inspired witch-hunts, where black men were expediently accused of sexism drawing on the old tropes of them being aggressive and intimidating or for ‘harassment’ in a heavily politicised environment where simple questioning the ideas promoted by hardcore feminists resulted in them being dubbed sexist. The London Boroughs of Hackney, Lambeth, and Haringey Borough Council became the centres of many of these national controversies.

In short measure, many of these local authorities became bastions of municipal feminism and the issue of racial discrimination and equality was reduced to little more than lip service. For example, Jamaican Dan Thea, the most senior black male and Director of the Housing Department of Hackney Council, and an uncompromising champion of racial equality was subject to a campaign of victimisation in efforts to remove him and his Ghanaian male Deputy from their post. The same tactic of targeting and labelling black males as extremely homophobic, and more so than whites and others, despite not one speck of evidence to support this label, was used a decade later by white gay and lesbian as part of their tactics in their rise in prominence.

The US Role in the Demonization of British Black Males, and the Emergence of the ‘Black Men Aint Shit’ Narrative

Facebook Comments
About Dr Perry Stanislas 3 Articles
Dr Perry Stanislas is a policing and security consultant, academic and visiting Professor. Perry is an Honorary Member of the Caribbean Institute of Forensic Accountants, which specialises in corruption and fraud investigations, and a member of the Association of Caribbean Criminal Justice Professionals. He has written numerous books, journal articles and papers. His books include ‘Public Corruption, Regional and National Perspectives on Procurement Fraud’, ‘International Perspectives on Police Education and Training’. Recent journal articles include ‘Contemporary Security Challenges in Edo State, Nigeria,’ in Geopolitics, History and International Relations Journal. Perry was a Group Leader (Operations) in the PACM Security and Intelligence Division and has worked all around the world in the areas of policing and security. He is the founder of Utani, a Black male fraternity and Tehuti Investment Club. Dr Stanislas is the owner and founder of an East African security technology company