Let’s Face It; BLACK WOMEN ARE THE RULERS OF THIS KINGDOM THAT WE CALL THE BLACK COMMUNITY!  Our Black Community worships them in all of their glory! We place Black Women on the pedestal in the Black Community as if they are God sent to an dying people. Despite shunning such horrific women with bad decision making skills, we as a group continue in our stupidity with worshiping them. This “BLACK WOMAN” aka “SINGLE MOTHER” accepts her royal crown as the undisputed ruler of the Black Community. Despite her misgivings and corruption, she sits upon her throne of  utter FUCKERY as she rules as a failing dictator of an third world country.  A dictator would be worthless without the subjection of faithful servants and rulers. One may ask: “Who are the servants of the scandalous rulers of these Black baby momma rulers?”

Young Black Boys are the servants of such fucked up women. The matriarchy of the “SISTER HOOD” of Black Women suppresses the testosterone and masculine development of  African American Boys. Instead of  Black Boys growing up to be leaders, they are essentially made to be something in particular: BLACK WOMEN THEMSELVES!!! 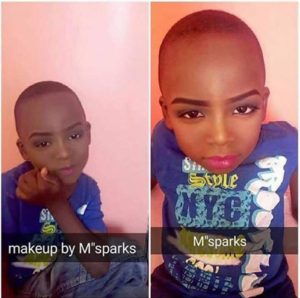 You see, my good brothers, Black Women intend on controlling the Black Community for the period time of infinity. They do not want Black Young men to take the Black Community from them. Black Boys will become men and then put these atrocious whores in their place. However, Black Women understand this merit very clear and well. To prohibit such an “coup d’etat” from occuring, Black women have resulted to feminizing their sons at an young an early age. As you can see in the photo above, Black women have resorted to putting feminine make up and blush on their sons to lead them towards the road of homosexuality. The reason why this happens is because they will not stand for the Black Community benefiting from African American Masculinity!

The worse part about this situation is that Black Women are not shameful in the fact that they utterly destroy their sons. They gladly post these pictures on Facebook to show the world how they have created “an daughter with a DICK.” Their stupid black idiotic friends and coworkers will comment on how “PRETTY” she has made her young son to be. I would also believe these are the same group of women who have Black Men on CHILD SUPPORT and complain about how their black father’s AINT SHIT!  These African American “QUEENS” have no problem whatsoever destroying their son’s on the behalf of defending the Destructive Black Matriarchy!

I will continue to point out the deliberate hatred that Black Women have for their Black Sons. Not only is demoralizing, it is DISGUSTING!  Most Black Mother’s do not deserve to carry children in their BELLIES!

As you know, the BUFFOONERY IS AT AN ALL TIME HIGH!