This publication about Emperor Sango is not about some unruly sex-crazed king committing suicide as the Spaniard-Americans like to depict him in Santeria. As a matter of fact this legendary African warrior King’s achievements are not only shredded in myths and mysteries as some of them were recorded and eulogized across West-Africa most especially in the Oyo Empire where he lived and ruled amongst the Yoruba and was later worshiped as a deity.

Though writing about the life of Emperor Sango’s life would take thousands of pages, this short writing will talk more about the core achievements of Emperor Sango, the sacred deified ancestor of the Yoruba who I regard the legendary ‘bad ass’ African King.

He was an actual man who lived around the 1st-century BC. At the time, the borders of West Africa were being invaded by Romans pushing south into the areas of present day Mauritania (which was then part of the Ghana’s Wagadu Empire).

The Ghana (emperor) of Wagadu called on the aid of other West African kings. Due to the Romans’ fearsomeness in war, all the kings kept quiet. This was until the news reached all the way to the Oyo Empire. Because of the relentless hunger for death that the Romans had, the babalawo (priest) of Oyo foresaw that if they did not stop the Romans from entering West Africa, the Romans would eventually reach the territory of Oyo and devour it. Thus, the king of Oyo, Sango, stood up and said he will unite all the cavalries of West Africa and defeat the Romans. King Sango gathered the cavalries and rode into Mauritania to confront the Roman armies. Sango was indeed a devotee of the Orisha, and was so committed that he was given the ase (divine power) to defeat all enemies. He massacred the Romans and caused them to flee back north and never return.

When the armies saw Sango’s invincible might, a legend grew that he had actually commanded thunder to strike down his enemies. Whether or not he did, it resulted in King Sango being synchronized with Jakuta, the original Yoruba Orisha of the Will (symbolized by lightning and fire) because Sango had proven to have become Jakuta. Thus, from then on, Jakuta became known as Sango, the Emperor of Oyo. It is due to such a history that the proud Oyo proclaim that they are Oyo Ori Oba (Oyo’s Divine Destiny as King), which the Hausa contracted to mean oYoorioba or Yoruba. 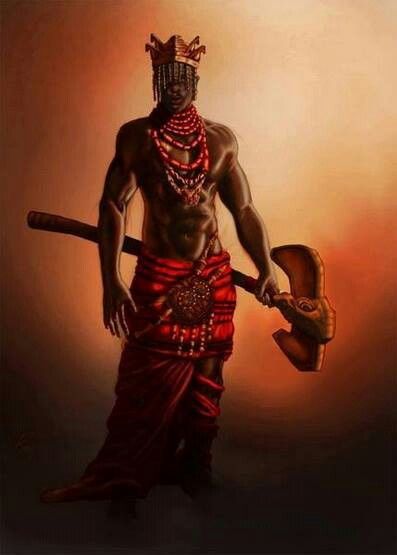